AT&T, Verizon, Sprint, and Apple are all now taking pre order requests for the iPhone 5. Might want to hurry. The Apple servers seem to be holding well but if the store goes down try using the Apple Store app for the iPhone. I got the 32 GB Black/Slate on AT&T. Which model will you be getting? As always good luck!

Today AT&T announced that starting Sunday will unlock off contract iPhones in response to complaints from Apple and iPhone users. This is great if you want to go to T-Mobile or are going to be leaving the country and don’t want to pay AT&T’s high international costs. Here is the official statement (via 9to5mac)

“Beginning Sunday, April 8, we will offer qualifying customers the ability to unlock their AT&T iPhones. The only requirements are that a customer’s account must be in good standing, their device cannot be associated with a current and active term commitment on an AT&T customer account, and they need to have fulfilled their contract term, upgraded under one of our upgrade policies or paid an early termination fee.”

So there you have it.

Well isn’t this interesting. The iPhone 4s is in an AT&T internal directory. Notice the iPhone 4 white models listed with GB. So it seems this is a new iPhone 4. Ever sense I have been reporting Apple iPhone 5 news there has been the rumor of Apple releasing an iPhone 4s with an A5 processor. We will see October 5th apparently.
[VIA Engadget]

Well that’s fast. Just a few weeks after Apple released iOS 4.3.4/4.2.9 patching the jailbreak.me exploit and the tethered jailbreak exploit Apple has released iOS 4.3.5 for the iPhone on AT&T and 4.2.10 for the Verizon iPhone 4. Apparently the update fixes more security updates with the update stating “fixes security vulnerability with certificate validation.” To get the update plug in your iPhone to your computer and in iTunes then hit the but that says check for update then download and install.

Apple.pro has told users that a user has given them images of the next iPhone. If the phone pictured above is a prototype than it has the same design of the iPhone 4 I can’t really tell the difference. The software running on the phone is is what apple uses to test the hardware of the phone. Some phones back when the iPhone and the iPod touch first launched some devices shipped with that screen. 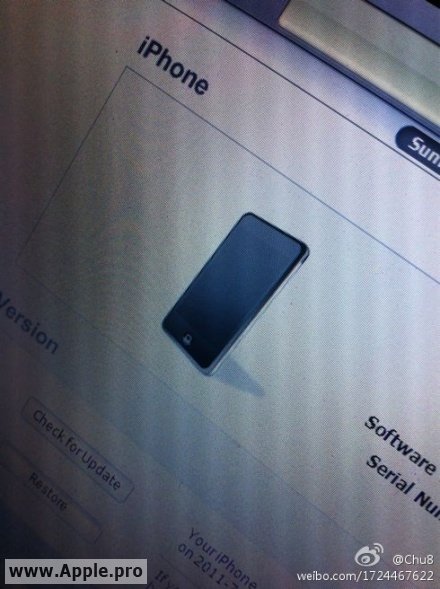 The image above is when the device is connected to iTunes. It appears to be a first generation iPod touch. I think this is fake. A little Photoshop magic because if you connect an iPhone with that screen than what’s the chance that iTunes would connect to it like the one gizmodo had. Also why would iTunes have it as a first generation iPod touch hint iPod touch be the image for the device. So I am calling fake on this.