uSurf 1.2.1 is here with mostly bug fixes but a few new things:

Version 1.2.1:
-Added the ability to remove tabs…
-Added a little lable in the toolbar to let you know if you added a tab or not.
-Due To iOS 7 limitations and the fact anyone who uses iOS 7 with iPad can upgrade to iOS 8 this app now requires iOS 8…
-Fixed error where split screen always thinks there is an update… My bad.
-Fixed the error where some web pages would make the App Crash… Ooops…
-Fixed error when switching themes would cause tabs to clear.

It is time for a new roundup for the rumors surrounding tomorrow’s event. Let’s get this done quick!

There is no doubt we are going to see the iPad 5 tomorrow but what will we have in it? Well here is what I know:

That’s it for my predictions tomorrow. Of course there will be a video with everything released sometime tomorrow after the event.  Also I will be tweeting live things from @matthewjagiela 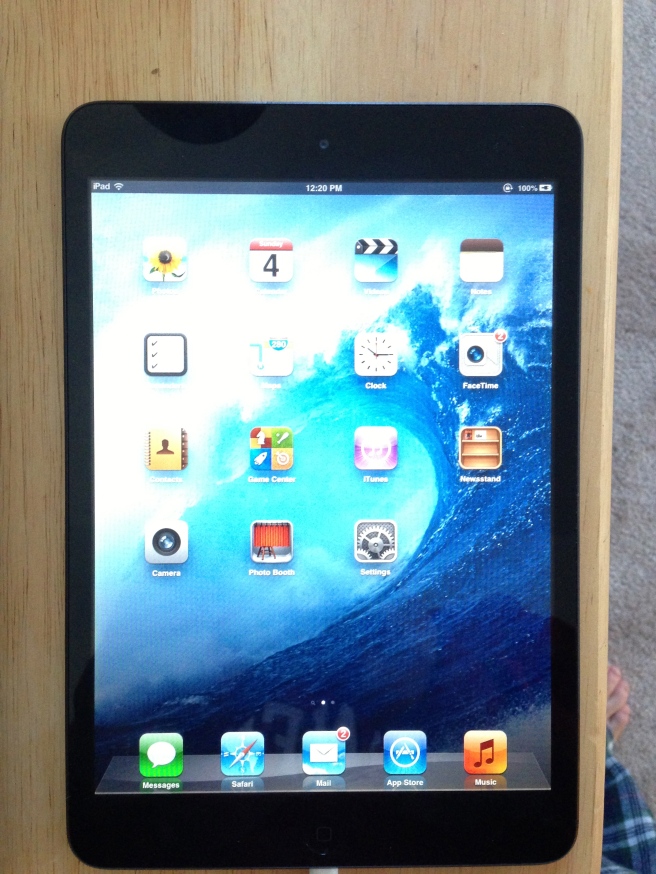 The iPad Mini is here and yes like other launches in the past I got mine the first day so I could bring you a speedy review of the new tablet Apple has to offer and answer the question: Is this iPad Mini really worthy of carrying the iPad tittle and what are the good’s and bad’s of this new device. Let’s get started

The first thing I want to start with is the design. This is now a smaller iPad, if anything it is a bigger iPod Touch. The design is the exact same without the color options really. Same form factor as the new iPod Touch just without the colored aluminum on the back. It is the same slate or silver you find on the new iPhone 5 with the mirror sort of bezel around the screen. The home button is smaller than the iPhone 5 which is surprising and has sort of the same solid feel the iPhone 5 has where you don’t have to worry about it breaking after using it so many times. There is on the bottom for the first time stereo speakers next to the brand new lightning connector that made its debut with the iPhone 5. There is 2 volume up and down buttons where it’s big brother has sort of the unified rocker and of course the mute/rotation slider. On the back a 5 megapixel camera and the front has a facetime HD camera. All of this delivered in a device as thing as a pencil. Let me tell you it feels good in the hand(s). A lot better than the iPad 2/3/4 that could cut into your hands with the teardrop design.

The screen is honestly the only real problem I have with this device. After being spoiled with the retina display in the iPad 3 and iPhone 5 the screen is a disappointment, however it is not as bad as everyone is making it to be. The only thing is yes text does look terrible. However if you are playing a game or even using it for a couple of minutes your eyes will adjust and it will be fine. The colors are bright and so is the screen. There is no way they could have put a retina display in something this small and thin. Maybe next year they will have the technology for it.

The software for the mini the user can tell is pretty basic iOS 6. You got the now famous maps app that you may hate or love and some other goodies. Now the things the user doesn’t notice is what gives Apple the advantage. Apple makes their hardware and software so they can make the software perfect for the hardware. For example the mini has incredibly small bezels compared to the iPad. The thing is however you can still rest your thumbs on each side of the device fully touching the screen and the software can tell you are just resting so the software doesn’t freak out. It’s something you won’t notice but would be annoyed with if it wasn’t there. Of course you also have siri and that is either a hit or miss with you. I also like that they made the iPad Mini run iPad Apps and iPhone apps. However be warned the iPhone apps will look TERRIBLE on the mini.

The iPad Mini runs the A5 processor found in the iPad 2, iPhone 4s, and iPod Touch 5. Even though the processor is a few years old apps launch fast and the operating system can keep up with lots you have to throw at it. How it stands in a few years will be anyones guess but for now the mini handles apps and data very fast with wifi speeds at 43mb/s. LTE models will be available soon for all of you who need to use your mini without wifi… Or you could do what I do and tether your iPhone to the mini, your call.

So which one should you go for the iPad 4 or Mini? Well the answer is a lot more complicated than you might think. If you already have an iPad with retina display I would say stay away. If you are looking to upgrade the iPad 4 with the new A6x and retina display may be the way to go. It runs everything a lot faster and has an amazing retina display. However it is big. If you need something portable and light you should go with the Mini. The screen isn’t that bad and it does run thing very fast. It would make a great iPad for most. It all depends if you want small and portable or big and powerful.

The iPad Mini is great. The worst thing about it really is the screen which really isn’t that bad. The price makes it a little less compelling to people who are looking only at price however in terms of usability you will want a mini over the competition. You can use both iPhone and iPad apps on the mini which make it better than android tablets which have mostly blown up phone apps not optimized for the display like iPad apps for the mini. The form factor is great and the software is great as well. The mini is very fast and is portable as well. The design is great and it feels remarkable to use. In some ways it is better than the big iPad 4. It all depends what you are looking for big and powerful or small and portable.

The iPad mini and iPad 4 went on sale today and with it Apple updated the iOS developer portal to include the new iPads with iOS 6.1. So go get downloading.

The iPad Mini isn’t supposed to hit the world (other than review models) till this Friday, however one lucky individual got his today and gave us a little unboxing. The packaging is the same as other iPads just smaller. You get your quick start booklet, lightning connector, and a 12w power adapter to help charge the iPad Mini and other iPads faster. 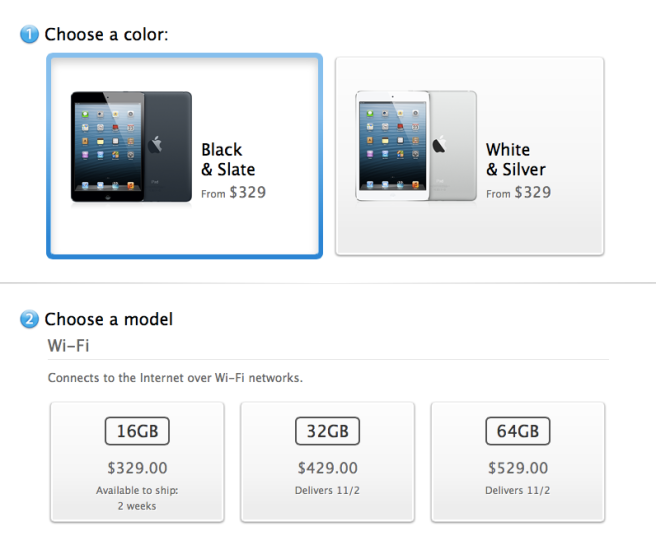 Initial stock of the iPad Mini in white and 16Gb iPad Mini in Black have been sold. If you didn’t get one you will have to take your chances on Friday to get one. The 32/64GB Black Models however are still available.

The new iPad Mini is now available to pre-order through the Apple Online Store and Apple Store for iPhone App. The servers are a little buggy but are having no trouble to keep up with the demand. Good Luck to everyone trying to get an iPad Mini and our full review will hit when I get the device. I got the basic 16Gb Wifi in Black that delivers 11/2 instead of the Cellular which has no release date yet. However it is 3:20 AM as of me writing this with school in the morning so I will be saying goodnight to all of you! Good Luck!

I will be the first to admit I thought the idea of a smaller iPad with around a 7 inch screen was remarkably stupid on Apple’s part. Then after the keynote I thought about some things and the idea kind of grew on me and now I am setting an alarm to go and pre-order one. The thing is the iPad mini makes perfect sense and it took me some time to realize it. You see I am a high school student and I am the tech person and of course I am a fanboy but here is the thing: I would rather have an iPad mini even though some of the specs are worse than competitors and is more expensive. The reason is simple: All my amazing iPad apps and iPhone Apps will run on it.