We are a little under 3 hours away from the World Wide Developers conference and right before the conference Apple has taken down the Apple Store. This could just be for some maintenance or it could be gearing up for the new hardware rumored to be announced today.

WWDC 2013 will be streamed through Apple Devices running Safari here.

You can read our rumor roundup for WWDC 2013 here. 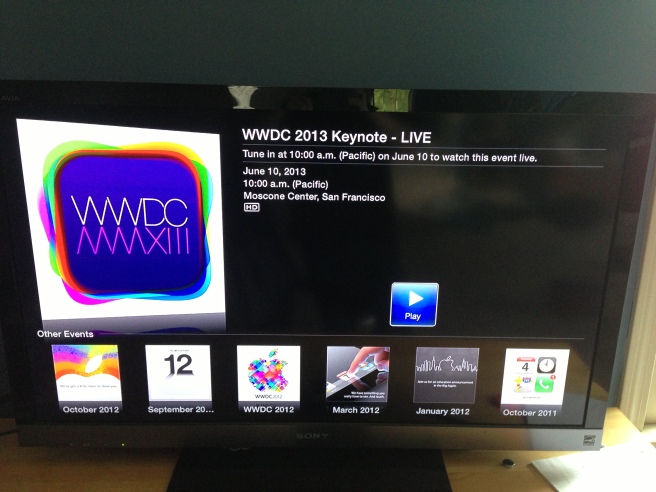 The WWDC 2013 keynote will be live streamed to the Apple TV when the event starts this morning at 10 AM PST or 1 PM EST. No word if the stream will be on other iOS devices or Macs.

(UPDATE)Apple has posted that the event streaming will be online for Macs running safari and iOS devices running Safari here.

WWDC 2013 is happening in a little less than 3 days so it is time to take all the information learned about what Apple could release and put it into one giant post. Let’s get started 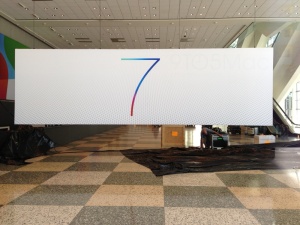 This is what most people are the most excited about it would seem I can tell you for a fact it is what I am most excited about. Last year Scott Forstall was pushed out of Apple by Tim Cook making Jony Ive in charge of iOS and that makes me very excited for a few reasons.

There is no real doubt of iOS getting a real change in design now after Tim Cook pretty much confirmed this at D11. Ive is expected to kill the “skeumorphic” or real world textures in the new iOS. For example if you were to go into the calendar it looks like an actual calendar. Ive is expected to get rid of this sort of design and actually I don’t know how I feel about it. It doesn’t really bother me but I want to see some changes and it will be interesting. Recently snapchat went “flat”.

It is told that iOS will be more of a gray and white texture with different colored navigation bars such as an app being white but with say blue or red buttons and navigation bars.

Hopefully weather will see an update to the new sort of design by Ive to be a more animated concept sort of like the weather channel app but in an Ive Apple sort of way. The image above shows a great example of what we could see.

Notification center could have much improvement and Apple knows it. There could be more information showed there. The Image above made by 9to5mac shows what could happen with more information such as news to be in a sort of widget. Hopefully if this does happen Apple will let 3rd party apps have the ability to take advantage of notification widgets.

There have been news around saying iOS 7 may include the ability to quickly upload photos to Flickr and videos to Vimeo. This would sort of be like how you share with Facebook/Twitter for photos and Youtube with videos you take.

Apple may also include Airdrop between iOS devices and Mac devices in this update. This function would allow you to quickly share information to other iOS devices and Mac’s. What specifically would be allowed to be transferred could include photos, documents, contact information, and more. However there were rumors of this being tested in iOS 6 being pulled right before launch.

Maps for me is fine. It gets me from point A to point B very well to be honest but that is not the case for other users and it needs to be changed. Hopefully Apple has something up their sleeves for more 3D cities and better navigation data.

Siri again works well for me but I wish it could do more. It needs to have offline mode for some simple tasks such as opening an app and calling say a contact but even more important than that it needs developer support. I want to be able to tell it to play a pandora station or something. Needs to happen and I think Apple will bring it to us with iOS 7.

Everyone I have talked to has agreed the multitasking needs to be changed. It seems to be plain and boring compared to the multitasking of other OS’s including Android. While Apple may not do this a card style multitasking system may be introduced with the next version of iOS.

WWDC isn’t just going to be the hub of iOS, OS X 10.9 is going to be released at the keynote as well which yesterday Sea Lion for a name has been popping around due to the sort of wavy banner you see above.

While iOS 7 is supposed to get rid of the skeumorphic design 10.9 is rumored to keep the design keeping the calendar leathery. Eventually we will see the Mac remove these items and designs but for now it seems we are going to have to deal with them

There has been word that 10.9 will add more features for power users such as myself while keeping the operating system relatively simple for those who want the OS to be as simple and user friendly as can be. An example of this would be tabbed browsing instead of multiwindow.

Full screen mode is supposed to have better support when connected to an external display. As it currently stands if you are on your Mac using a display for a secondary display and not mirroring and enter a fullscreen app you will have the basic Linen texture doing absolutely nothing for you. Apple knows of this problem and is going to let you do something with the secondary display in fullscreen mode.

Back To The Mac

The main point Steve Jobs made when introducing Lion was that Apple was taking what they had learned from iOS and what people loved and brought it to the Mac. Apple did this with more features in Mountain Lion and it seems they are going to be doing the same thing with 10.9.

Apple may bring the App Switcher in the current iOS or if they are making a newer one for iOS then the newer one and bringing it to the Mac. This would benefit users who are accustomed to iOS and would allow better power and battery management running multiple apps.

Siri is also expected to make it’s way onto the Mac to help you with the same things it does with iOS hopefully with developer support.

As for hardware I wouldn’t expect any iOS devices to make an appearance with updated hardware at WWDC. However there may be some new Macbooks that come into light at the conference.

9to5mac has pricing information that appears to point to new MacBook Airs to come to light next week. The additions seem to be duel microphones and faster processors. The update would also include faster 802.11 AC networking. A retina display seems unlikely but with the addition of Intel’s new faster and battery efficient Haswell chipsets it could happen but at WWDC may be unlikely. 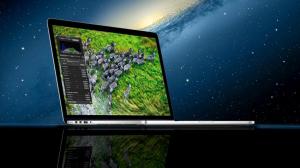 There is little talk of the MacBook Pro retina or not being updated at WWDC but it is very possible that the 13inch Retina MacBook Pro could be updated with faster networking with a thinner design.

Saved this for last because I am not really to sure about this one. Today it was told iRadio is a go as all major record labels had agreed with Apple’s terms for the service but if Apple decides to announce it at WWDC is a very valid question because they don’t have to they can wait for the launch of new iPod’s and iTunes later this year.

The service is expected to be a sort of Pandora style experience streaming what a user has previously listened to. Also the songs would be based of interest of the user and the service could pull user data from songs purchased through iTunes or on devices running iTunes in general.

Pricing would be free but there would be ads with the service and of course a paid version for all ads free.

I will be covering as much as I can through my twitter (@matthewjagiela) and I will have my twitter feed on the top right of the site the day of the keynote. It is yet to be known if Apple will allow users to stream it live. The Keynote is supposed to be 2 hours long with the Betas to released to developers after the Developer portal is back up.