As it starts to become Christmas in my part of the world I would like to take a minute to say thank you to everyone who has used something I have developed over 2018.

My hope is that even though there are some bugs along the way that the applications I make and post bring some joy or make your life a little bit easier in some fashion so I would like to say thank you.

As of right now all apps and updates for 2018 are finished! There will not be a new update for any uApps application until early 2019 with big things left to come…

With that said a big piece of the uApps puzzle was absent this year: uSurf. uSurf got to be developmentally challenging to make progress moving forward so I decided I was going to completely re-design and recode the entire thing using swift and webkit. While there are still a lot of things to be developed for uSurf 6 because it is the holidays here is a sneak peak of the new UI you will see when launching uSurf 6:

So exciting things are coming in terms of uSurf, uTime, and something else completely new! However, they take time and I am a busy college student about to graduate so a lot of these projects are done in free time so again thank you for bearing with me.

Again thank you and I hope everyone has a terrific holiday and a happy new year!

uTime 3.2 is now being pushed to the iOS App Store! uTime 3.2 brings new enhancements such as the ability to search for a timer to see or delete! Along with this the iPhone timer view now has a large title to go with the overall theme of iOS 11 (and 12). Small enhancements to theming have also been made!

This was originally supposed to be a “uTime 3.0.1” is now available but while playing aroun with uTime 3.0.1 after it went live on the app store I discovered a critical big that the app would crash on the iPhone after adding a new timer and then navigating to the timer that was just added. I pulled uTime from the App Store shortly after finding this issue and patched, and submitted the fix with uTime 3.0.2. I am not sure if the problem originally was in uTime 3 but everyone who can should update to uTime 3.0.2.

3.0.1
-Added the 3.0 changelog to iPhone…(Oops)
-Switched the Cancel and Save button on iPhone.
– On iPhone the Counting Down To: portion of the label has been removed

After all of the WWDC fun from yesterday I introduced uTime 3 for iOS. I am very happy to announce that right now uTime 3 is officially available to download on the iOS App Store.

To get an in depth view of some of the changes look at the post below or follow this link to learn more about uTime 3.

The official uTime 3 changelog is massive and here it is:

Even though uTime 3 is 11+ only iOS 10 and below users may still download uTime 2 from the App Store.

uTime 3 is massive for iOS and I hope all of you enjoy it. As always updates will be coming throughout and due to how I set up uTime 3 they will be coming much quicker! 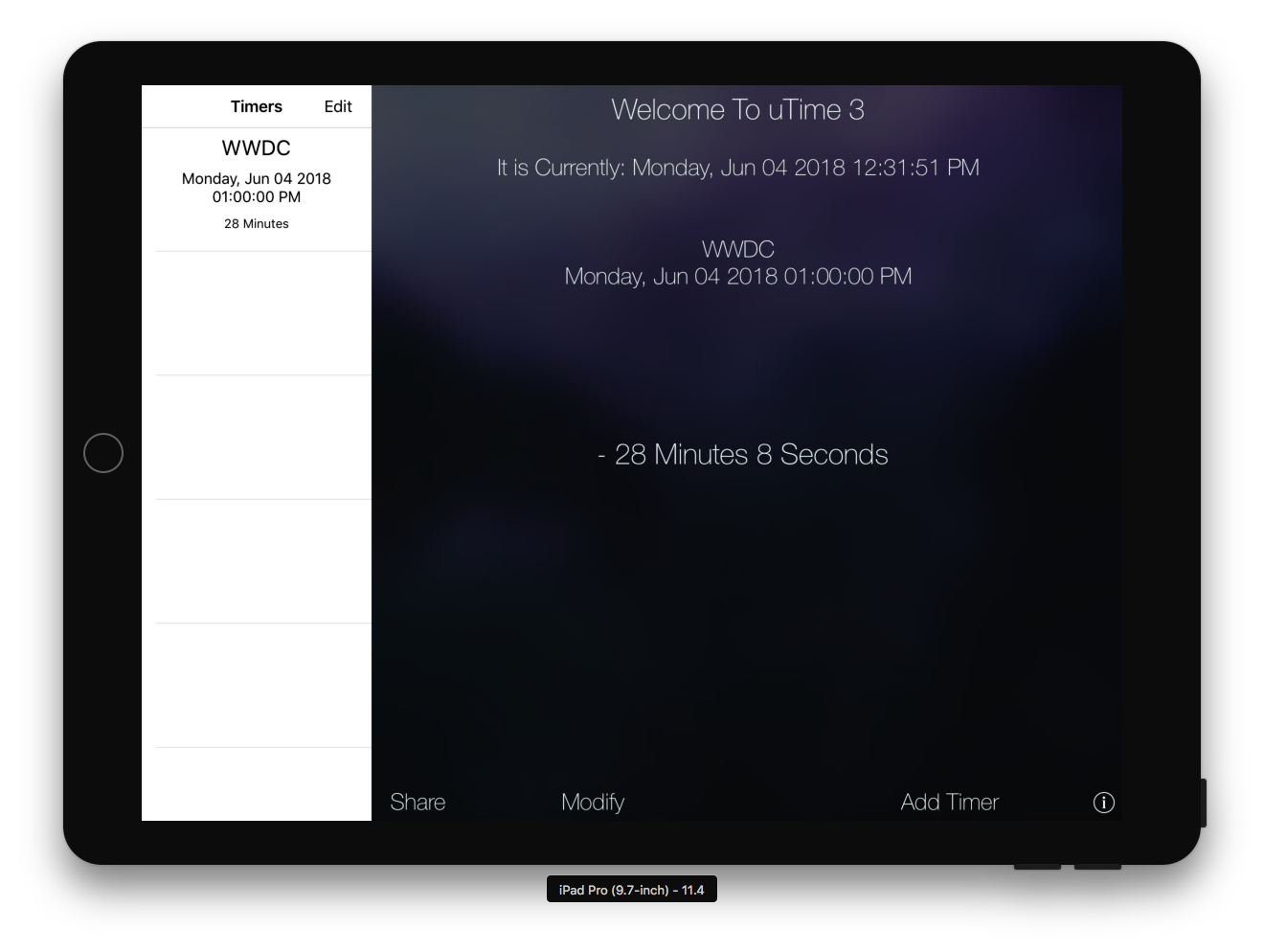 With all of the excitement of WWDC settling I think it is a good time to show off a project that has been about a year in the making: uTime 3 for iOS.

uTime 3 for iOS took a long time because I had to completely rewrite the entire application because of how broken uTime 2 was at the end of it’s development cycle.

The result is a uTime with much more features, much less usage on system resources, and still a fantastic app for counting down to (or from) your next date.

As seen from the screenshot above the iPad version has taken heavy inspiration from the macOS version of uTime 3 and has the timer section embedded into the homescreen.

Along with that notifications have been completely redone: Instead of annoying popups throughout the app a simple banner alert will appear to show the timer has run out of time. Along with this of course timers with an older time than the current date will not fire.

On the homescreen with timers that are being counted down a minus (-) sign will be in front of the time remaining. For timers counting forward because the date has always passed a plus (+) sign will appear.

You are now also able to share your timer with any of your share sheet apps simply by pressing share. It will popup with the name of the timer along with the maximum time remaining.

With uTime 3 some things have been removed: Sorting timers by date have been removed due to the fact it did not work well syncing between devices. This feature will be returning in a future update. Also uTime today widget has been disabled because for some reason when I rewrote the app, Apple blockaded my access to iCloud in the today section so I have to rethink how that is done as well. This will also be returning in a future update.

There are a lot of things to look forward too especially with the addition of Siri shortcuts for app developers. I will be hard at work providing updates not only to uTime but a variety of uApps applications to get them up to date.

uTime 3 will be live on the App Store this week and I hope everyone enjoys this huge update. 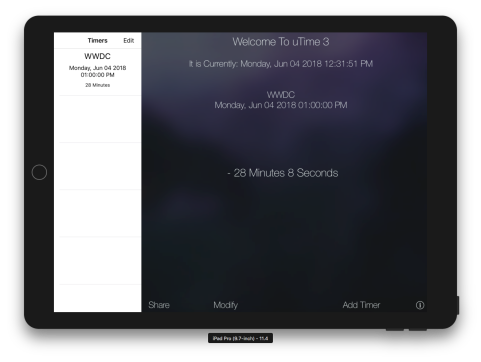 WWDC is right around the corner and yes uTime 3 for iOS is in full development! However, it is not ready for publication yet but uTime 2 needed some fixes… SO uTime 2.3.6 is now available to download with the following changes:

Again uTime 3 is coming and it is a big update…. There will be more on that later….

After being absent from the Apple Developer platform for 3 months I have updated uTime for macOS to version 3.0.3. The reason this update (and other updates) are taking a while is because as I am in my junior year of college I do not have as much time as I want to devote to app updates. However, there are big things in the making right now and it’s worth the wait. With that here is uTime macOS 3.0.3’s official changelog:

Thank you to all for all your patience. Big things are coming!

I hope everyone who got their iPhone X is enjoying it so far! I am currently waiting for mine to be delivered by the mystical UPS man. Just as a heads up as of right now all uApps applications have been updated to take advantage of the iPhone X’s super retina display. Hope you all enjoy!

After a lot of programming and testing I am finally glad to say that uTime 3 for macOS is available on the Mac App Store. uTime 3 of course still works perfectly with uTime for iOS which I will say I am slowly developing an update for as well.

With uTime 3 for macOS I wanted to make it more of a computer application and the best way I thought to start off was giving it a great new icon that wasn’t just a mimic of it’s iOS counterpart. The circular icon which is a theme with many macOS apps really looks a lot better than versions in the past and looks absolutely fantastic sitting in the dock.

Along with a new icon macOS also has a built in theme for “Dark Mode” and “Light Mode”. uTime can now detect what your computer is and will adjust the interface accodingly. If you have the “Light Mode” set for macOS then you will see a brighter interface. If you have “Dark Mode” enabled in settings then you will see a darker interface. What’s great is that when you change this option within system settings uTime changes with it with no extra effort on your part.

A smaller but greatly needed addition was that finally internet labels are available in the support view. What this means is that now you can see if you are running the newest version of uTime along with what the newest information from uApps is without having to go searching for it. Everything is in one easy to find place.

A big thing that is in this update is now you can see an approximation of how much time is left for EACH timer in your list. Under the date of when the timer is due, there is a new label that shows the maximum amount of time that is left before that date is here. Of course to save battery and not overload the processor this information is refreshed every 5 minutes, when a change happens with iCloud, or you make a change to a timer within the app (including adding one).

Of course there is also a lot of behind the scenes changes and bug fixes from previous mistakes that aren’t mentioned. Of course uTime 3 is a free update and free download to anyone. uTime 3 for iOS is currently in development and I hope I can get it out soon. For now, enjoy uTime 3 for macOS.